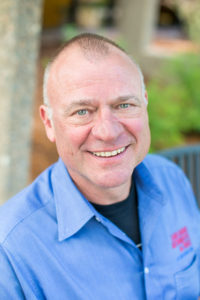 Dana TePoel has more than 30 years of automotive experience. He purchased a failing emissions-testing shop in 1992, expanded it into a full-service auto repair shop, and has served the Denver community’s car-care needs with the highest degree of integrity. Lake Arbor Auto is the only full-service shop in the Denver area that offers on-site, dedicated training space for technicians plus complete diesel emissions testing. His emissions shop survived while dozens around him closed their doors when Colorado adopted the statewide, Envirotest emissions-testing program. He attributes Lake Arbor’s survival to his policy of referring customers to state-sponsored clinics and his obvious willingness to “do the right thing” for customers. Dana’s ethical mindset is now reflected in LAA’s official slogan: “We do the right thing for you every time.”

Dana is an Advanced Level Master Technician in both Gasoline and Diesel disciplines, and is an Accredited Automotive Manager with the Automotive Management Institute. He is secretary/treasurer of the Colorado Automobile Service Association, and he is active in the Regional Air Quality Control Council.

Under TePoel’s guidance, Lake Arbor Auto has enjoyed an active role in the Metro North Chamber of Commerce, and the company recently joined the Denver Metro Chamber of Commerce. He became a leader in Gov. Ritter’s “Maintenance Matters” campaign and completed coursework for certification in child safety seat installation; and he authorized funds for two employees to join him in that coursework.

Gary Kingsbury is one of Lake Arbor Automotive’s most senior employees, and he has been instrumental in helping to shape the company’s vision of “Doing the Right Thing” for customers – without exception. When Lake Arbor Auto hired Gary as its No. 1 service advisor, the company was actively seeking someone with stellar core values and principles. He understands that issues are often more than just black-and-white; but the commitment to doing the right thing IS ALWAYS black-and-white. Gary goes out of his way to resolve customer-satisfaction issues and puts “doing the right thing” ahead of saving the company money. 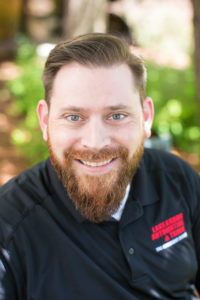 Patrick Shaver, originally from Kansas City, joined Lake Arbor Automotive & Truck as a customer service adviser in 2016. He has worked in the automotive repair and maintenance business since 1997. He enjoys playing pool and racing his motorcycle on ice. He is an expert in European and Asian autos, and he knows about classic cars that he was able to restore a 1967 Thunderbird. He enjoys repairing cars, plus anything else that needs fixing, with a special appreciation for the problem-solving aspect of the job. He gets a great sense of satisfaction out of educating customers to the point that the are able to make wise decisions about their vehicles. 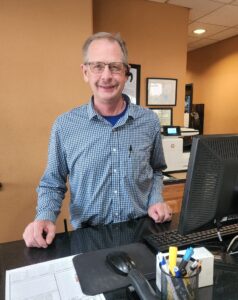 A Colorado native through-and-through, Service Adviser Troy Payne is a man of many talents, interests and hobbies. He grew up in Broomfield, then moved to Lyons; but he and his wife, Barb, now live in Frederick, Colo. He especially enjoys spending time with Barb, their three sons and four grandchildren. His interests include motorcycles, photography, and anything in which he can work with his hands. He remodeled a 150-year-old family farmhouse, and the auto repair business was a natural fit. He says, “This business chose me. I enjoy helping people make good decisions about their auto repair.” At one time he thought he wanted to be a journalist, and he even went to the University of Colorado to get his journalism degree. If he ever gets back to the typewriter, he might consider writing about his 40-plus years of doing the right thing on behalf of customers. 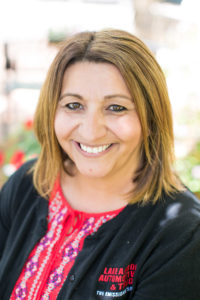 Often the first face that customers see as they enter the building, Ema Gutierrez has been with the LAA team since early 2013. Her work station is immediately inside the front door, and she greets everybody with a big smile, often by first name! She was hired in part because of her friendly, outgoing attitude; but she has a good memory for details and she is able to help with administrative functions, too. 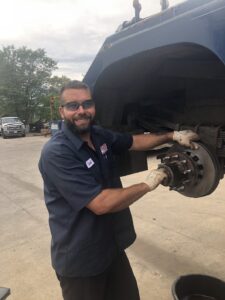 Levi Scena grew up in an Arvada family of mechanics, so it was nearly preordained that he would end up as a master technician. He joined Lake Arbor Automotive & Truck in 2021, bringing with him 15 years of experience and strong love of anything with engines. His two main hobbies are boating and motorcycling (with a preference for Harley Davidson), and he gets his greatest satisfaction from enhancing an engine’s performance. He lives with his daughter in Westminster, and he has certification from courses in ASE training, and Chrysler and Ford diesel courses. Next time you see him, be sure to ask him about the 12-valve compound turbo that he built from a roller. 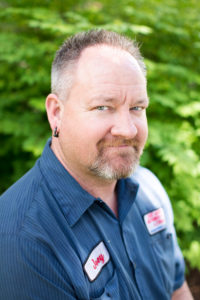 Joey Smith is a master technician with more than 28 years in the auto repair business, including his stint with Lake Abor Auto since 2016. He is Denver-area born and raised, currently residing in Northglenn with his three dogs, two ducks and one cat. He also has two adult children. Like several of his LAA garage-mates, he enjoys riding his motorcycle (a 2008 Harley Davidson). He can handle virtually any job that comes his way, but he is especially adept under the hood of a Honda, Acura and/or Subaru. 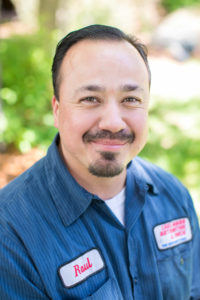 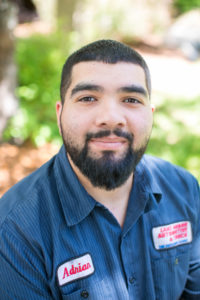 Adrian Garcia of Denver (originally from California) is one of Lake Arbor Auto’s diesel emissions inspectors, but there is no limit to his interests and abilities. Here are just a few of his hobbies: creating music, hiking, fishing, basketball, reading and attending concerts. Of course, he has a huge interest in cars; and one of his favorite projects on his own time was the replacement of front and rear struts on a 1998 Pontiac Grand Prix GT.  Demonstrating his clear understanding of the LAA “Do the Right Thing” motto, he once made someone very happy when he found keys and a wallet at a movie theater and returned them to their owner. 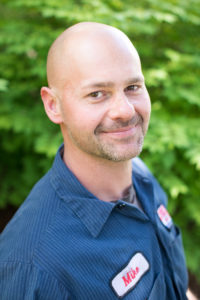 Mike Crumpton of Evergreen has 18 years of experience in the auto repair and maintenance industry, and he loves the challenge of a good electrical problem, whether it’s a blown fuse, dead battery terminal, a faulty switch or a problem in the alternator. He’s never far from his voltmeter. He also enjoys working on automatic transmissions, and hopes you will ask for him personally when you come to Lake Arbor Auto.

Brodie Jalbert has five years in the auto repair and maintenance business, and he is eager to expand his depth of knowledge. The Arvada resident joined Lake Arbor Automotive & Truck in 2021 as a diesel emissions inspector and as a stand-in for routine maintenance. Not long ago, he found a wallet containing cash, and he walked it directly to the owner at the owner’s home address, demonstrating that he has the “Right Thing” kind of character that fits perfectly with the Lake Arbor Auto culture. He has a dog named Weezel, and in his spare time he enjoys riding/jumping motorcycles and ATVs. 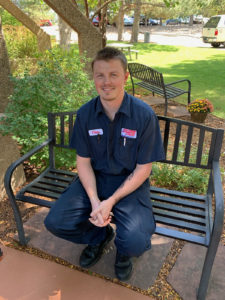 A recent graduate of Lincoln College of Technology (with high honors!), Chris Crotty was born into the auto repair/maintenance culture. His grandfather was even on the verge of a seat in the 1969 Daytona 500 – until Grandpa learned that Grandma was about to give birth to Chris’ mother. He loves cars and other vehicles, including snowmobiles, and he spends a lot of time at car shows. He also enjoys a little golf, and hanging out with his girlfriend and their dog, Bella. A native of Arvada, he currently lives in Commerce City.

Her first accounting job was in 1991 when Tiffany Cox took a job alongside her mother at a car dealership. Tiffany eventually became the office manager. At Lake Arbor Auto, Tiffany handles all the books and all the back-office/support responsibilities. The famous Lake Arbor Auto “Right Thing” policy especially appeals to Tiffany. She once spent a cold and rainy afternoon in a retail parking lot helping a disoriented elderly gentleman get back in touch with his family. She is married with a son (Brodie) and a dog (Weezel); and they like to camp, fish and go four-wheeling.